This page lists stories produced by /aidg/ posters in AID.

A fantasy dark comedy written in AID during July–August 2020. The best story to come out of /aidg/ general.

The year is 2078, and humans and demons live side-by-side on Earth. It is three decades after the Rapture War, during which the demons invaded Earth. The humans fought back fiercely, with their advanced technology and weaponry matching the arcane power of the demons' dark magics. It was a long and bitter conflict. The Rapture War came to an end with a truce between the two sides. Realizing that prolonging the war would only lead to mutual destruction, the two sides laid down their arms and are now attempting to rebuild a ravaged Earth. Still, tensions remain high, prejudices remain, and old grudges die hard.

You are Gil, a spell thief living on post-Rapture Earth. You make a living stealing magical artifacts for high-paying clients. It's a dangerous and often unrewarding job, but you do it more for the thrill than anything.

One day, you receive a peculiar job request outside of your usual channel. The request came in the form of a letter, delivered right to your secret hideout. It reads:

Continuation of the Gil Saga, unfortunately unfinished by the author.

A tale of a knight whose horse got turned into a human woman.

Your name is Pars Endes, a knight-in-training belonging to the Order of Nwif. You joined the Order as a child, shortly after your mother passed away, and they have raised you ever since. Despite your lack of live combat experience, you are a capable fighter in your own right. Your preferred weapon is your Elk Sword, which was a memento from your late mother. You have a trusty steed named Malt, who is a tan mare with a white mark on her forehead. She is famous in the Order for her unlimited stamina, and her unruly temper. You are the only one she listens to.

You were sent out on a mission to purify a cursed fortress, ruled by the vile Succubus Queen and her demon horde. The mission failed, and the demons attacked, forcing you to leave your squad behind in order to send for help. Before you could make it back to camp, the Succubus Queen catches up to you. She reveals to you that Sir Lambert, your very own commander, has betrayed you to the demon forces. She grievously wounds both you and your precious horse, Malt, who tried to protect you. You black out, and in the throes of death, you hear an angelic voice telling you not to give up, to cast away your doubts, and to stay courageous.

When you wake up, you find that Malt has turned into a human with equine features: she has two pointed ears that curve upwards, and a long, bushy tail.

Adventures of a male brothel employee in a world filled with monstergirls.

You are Ryan, a resident of the Imperial city. You were once a rather poor farmer, but managed to rapidly raise your income and quality of living by changing professions. Instead of a farmer, you're now a male prostitute at the Husband's Hideaway, an inner-city brothel exclusively catering to monstergirls. It's your job to show lonely monstergirls the time of their lives, in exchange for a very hefty paycheck. Most look down the work, but you love it. It's a job that both pays well and caters to your inner pervert.

Your bedroom at the Husband's Hideaway is quite large, being designed with every shape and size of monstergirl in mind. You have a large and plushy bed, and a spacious bathroom as well.

When working, you spend you time here in your bedroom waiting for the magic bell next to the bed to ring, announcing an incoming customer. You don't pick your customers, they pick you, so every encounter is a surprise. You've seen quite a few monstergirls so far, but there always seem to be new ones coming through your door.

Link to the prompt: https://prompts.aidg.club/786 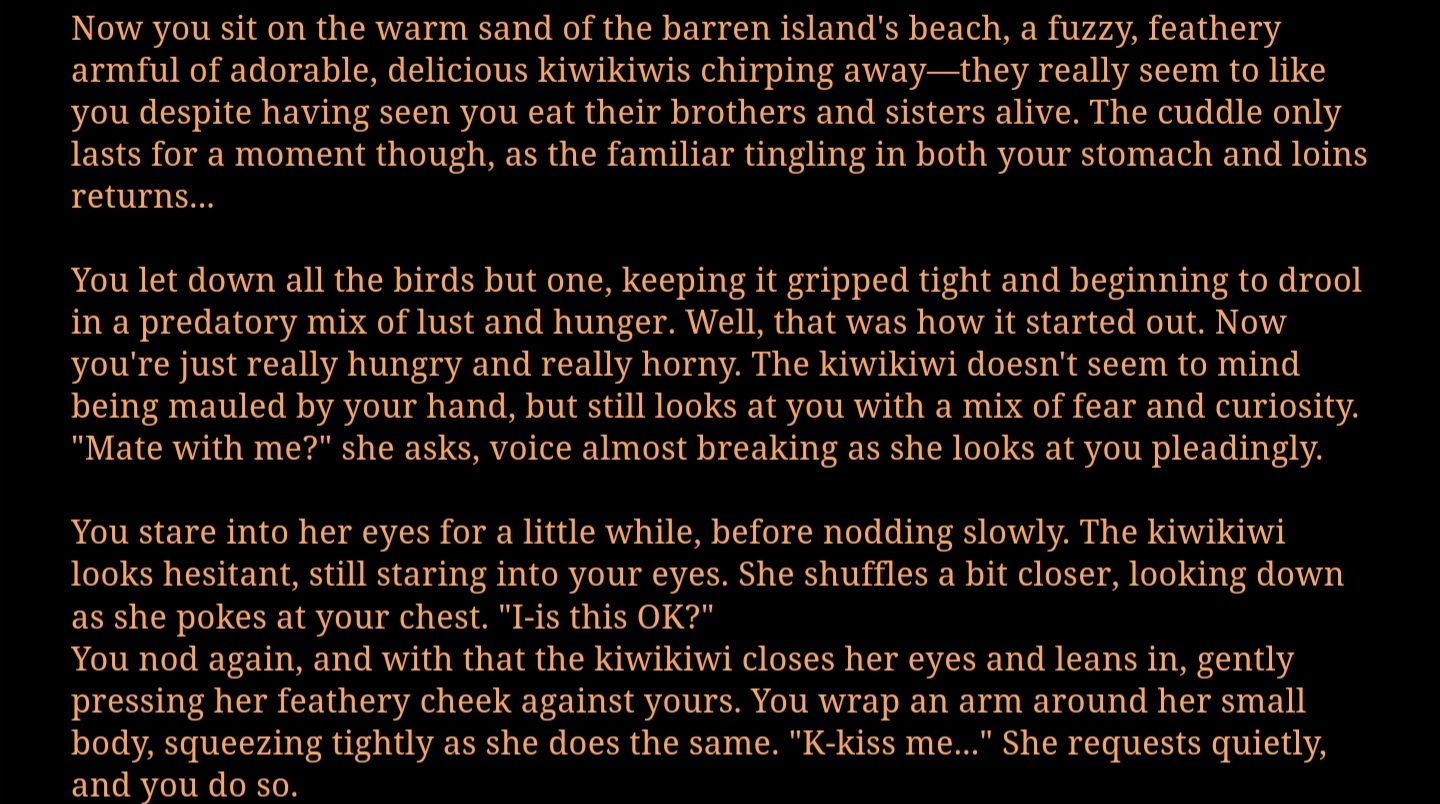 Time passes, a blur of rendering the tiny kiwikiwi corpses to nothing but bare-bones and withered flesh. Your work is always punctuated with feasting on the delicious, life-restoring bodies of the cute birds. The island you're on is small, coastlines barren and under the constant barrage of the burning tropical sun, leaving you little to explore. The trees are fruitless, and the water devoid of fish, empty and desolate. The only thing that passes the time is eating the birds, feasting on their delicious bodies agonizingly slowly at a time of the scorching island in solitude and boredom for days until finally, you pass out only to wake up to do it all over again.

You slowly realize there are fewer and fewer kiwikiwi birds...

She came to him that morning.

She entered cautiously, moving quietly, drifting through the chamber like an apparition; the lone sound was that of her mantle brushing her exposed skin.

The young woman deliberately climbed onto the bed, and onto him, wrapping her thighs around him.

Slanting forward on stressing arms, she brushed his face with her hair. Grimacing, she loomed over him and contacted his eyelids, cheeks, lips with the tips of her chest.

The witcher continued to snore loudly, slumbering as stable as a stone. She became flustered, yet didn'tdare move away from him.

"Ahh...!" He groaned, opening his eyes. She gulped, knowing what would come next.

"Leave me be! Can’t you see I’m trying to sleep!?" The witcher, in a rage, shoved her off of him.

Her body tumbled off of the bed, and she arrived upon the floor with a tortured cry.

He leapt off the bed, pirouetted in midair, prior to conveying a hefty kick to her sanctuary.

The young lady's body arced through the air, and she crashed into the wooden wall with a pained yelp, before sliding down it.